These footnotes are a follow-up to our live discussion in episode one of the podcast, including a selection of points from my researches that we didn’t happen to include, as well as follow-up on any facts and questions that came up during our conversation with Dan.

Ibsen’s late plays
Ibsen himself described his later plays as a “series of dramas which began with A Doll’s House and completed with When We Dead Awaken”. The list of plays that he wrote as a mature writer are the ones we are most familiar with: 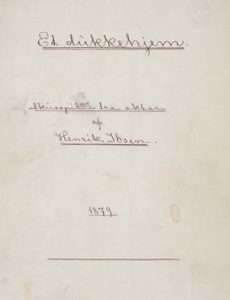 Title page in the manuscript of A Doll’s House 1879

Ibsen as a Bestseller
Ibsen’s plays were always published before the play was performed. He had a huge following and book sales, particularly in Norway where drama was more popular than the novel as a literary genre at the time. In his talk at the Re-imagining Nora symposium Tore Rem (editor of the Penguin editions of Ibsen’s plays), described crowds of people waiting on the dock side for the ship from Denmark to arrive and unload the first copies of one of Ibsen’s newly published plays. 8,000 copies of A Doll’s House were sold in the first month in December 1879, a healthy number even by today’s standards.

The first productions
A Doll’s House premiered in Copenhagen in Dec 1879, closely followed by productions in Stockholm, Oslo and Bergen. It then opened in Germany, where the actress playing Nora famously refused to perform the play as written, declaring, “I would never leave my children!” Since the playwright’s wishes were not protected by copyright, Ibsen decided to avoid the danger of the play being rewritten by a lesser dramatist, by committing what he called a “barbaric outrage” on his play himself and giving it an alternative ending in which Nora did not leave. This version played in a number of German cities during 1880 but was not a success and the producer restored the original ending.

The first performance of the play in London was an adaptation called Breaking a Butterfly by Henry Arthur Jones and Henry Herman in March 1884, which was a travesty of
Ibsen’s work: Nora was saved from her rebellion and immortality by making a faithful clerk steal her promissory note from Krogstad’s desk. … The curtain fell upon a happy home. 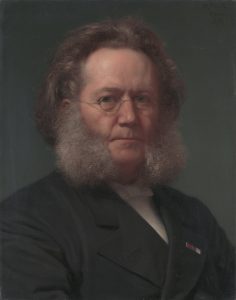 Henrik Ibsen age 51 in 1879, the year A Doll’s House premiered, painted by Henrik Olrik in Rome

Censorship
One of the reasons that Ibsen’s controversial plays were freely staged in Norway was that there was no state censorship; whereas in Britain the Lord Chamberlain’s office still had the power to ban a play or request changes before allowing it to be openly produced. A Doll’s House seems to have slipped through the Lord Chamberlain’s net – Nora’s actions apparently being deemed “too absurd altogether” to be obviously offensive!

Whereas his next play, Ghosts was not so fortunate. The subjects of venereal disease and incest were thought not fit for public display. Ghosts which was written two years after A Doll’s House in 1881, did not have a UK production until 10 years later and even that was a single private showing by the subscription-only Independent Theatre Society whose members included playwright George Bernard Shaw, and authors Thomas Hardy and Henry James.

The first proper British production of the play in in its original form as Ibsen wrote it opened on 7 June 1889 at the Novelty Theatre. The critics
savaged the play, but audiences loved it and the run was extended.

Before this public production there had been two private productions in its proper form in London — one featured George Bernard Shaw in the role of Krogstad!

George Bernard Shaw
was an outspoken supporter of Ibsen, championing him in his essay Quintessence of Ibsenism published in 1891. He wrote about A Doll’s House

“The ideal wife is one who does everything that her ideal husband likes and nothing else…To treat a person as a means to an end is to deny that person’s right to live.

And even more portentously:

“Nora’s revolt is the end of a chapter of human history. The slam of the door behind her is more momentous than the cannon of Waterloo or Sedan, because when she comes back, it will not be to the old home; for when the patriarch no longer rules, and the “breadwinner ” acknowledges his dependence, there is an end of the old order.”

Shaw especially admired Ibsen’s independent-minded characters who resist the hypocrisies of social convention, characters he often portrayed in his own plays. He apparently once stated that he thought Ibsen was superior to Shakespeare because the social impact of his plays. According to Shaw “A Doll’s House will be flat as ditch water when A Midsummer Night’s Dream will still be fresh as paint, but it will have done more work in the world.”

Tarantella
Ibsen moved to Sorento in Italy in 1864, where he may have learned about the Italian dance that Nora dances in the play. According to the Encyclopedia Britannica the dance is characterized by “light, quick steps and teasing, flirtatious behaviour. The tarantella’s origin is connected with tarantism, a disease or form of hysteria that appeared in Italy in the 15th to the 17th century and that was obscurely associated with the bite of the tarantula spider; victims seemingly were cured by frenzied dancing.” What has bitten Nora?!

The enduring impact of A Doll’s House in our contemporary times
Hattie Morahan, who played Nora in the Young Vic’s production of the play a few years ago revealed at the Re-Imagining Nora symposium that she and her fellow cast members knew people personally who decided to leave their partners after seeing the play. That is the power of theatre! 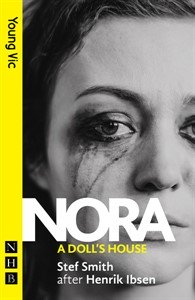 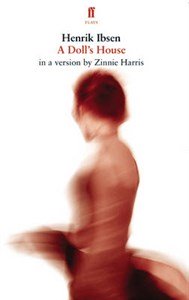 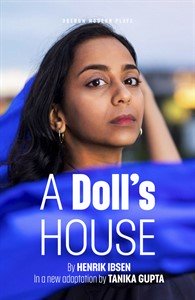 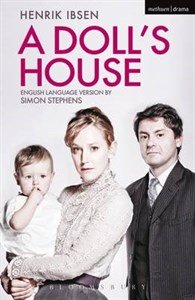 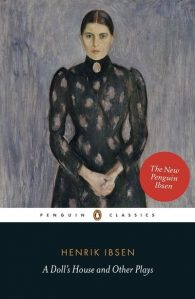 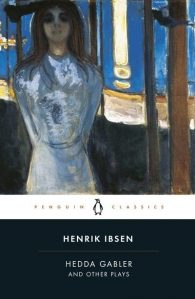