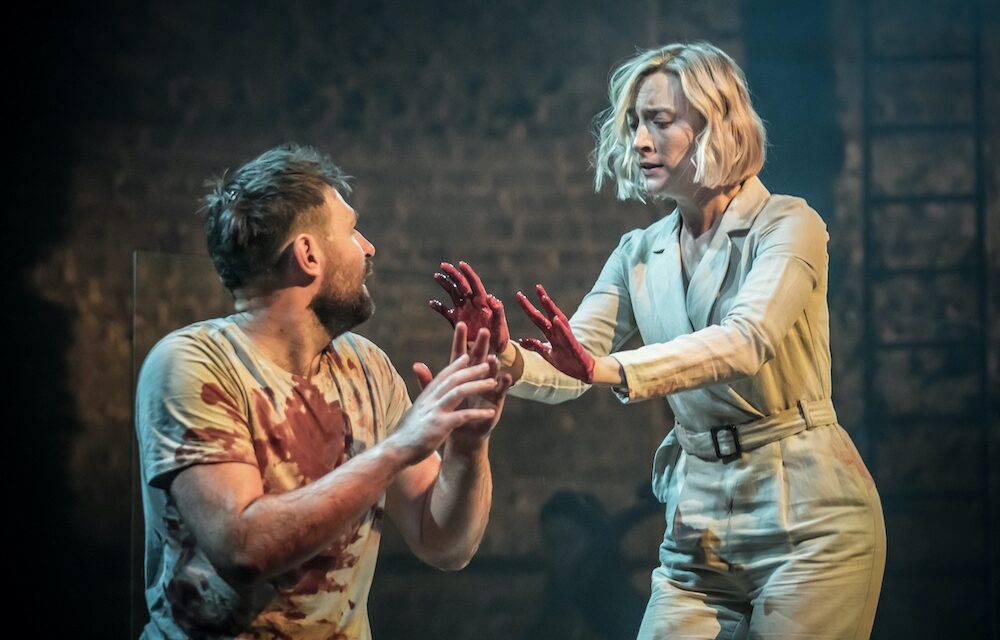 The Footnotes to our episode on Macbeth include observations on the unnatural, propulsive pace of the play, and on the origins and interpretations of Shakespeare’s three ‘weird’ sisters.

“…’Twere well it were done quickly.”
The poet Samuel Taylor Coleridge called Macbeth Shakespeare’s “most rapid” play, and as Emma and I discussed in the podcast, the action certainly flies along. There is a very deliberate sense that events are running out of control, for at each stage in the plot the Macbeths act precipitously. The idea of time running ahead of them is established from the start – the announcement that the King and his company will stay with them catches them by surprise – Macbeth barely has time to get home before they are due to arrive and they can’t but be hastily prepared to host the court. Duncan staying with them immediately after they’ve learned of the witches prophesy also presents them with an unexpected opportunity; one that they’ve not had time to consider and which they must act on that very night.

In their acting to kill Duncan they obviously disrupt the normal sequence and pace of succession. When Duncan bestows his favour on Macbeth in making him the Thane of Cawdor, he tells him “I have begun to plant thee, and will labour/To make thee full of growing”. This would be the natural time scale, where Macbeth’s progress would be nurtured over time

Macbeth’s need to act fast is not only a practical one, it is also psychological. When he steels himself to do the deed quickly, he expresses the reflexive instinct not to want to look too closely at the fact of what he is doing. Indeed this urge to avoid thinking about his actions only accelerates: “From this moment/The very firstlings of my heart shall be/The firstlings of my hand. And even now,/To crown my thoughts with acts, be it thought and done.” His evil thoughts do not bear examining or arresting: “Strange things I have in head, that will to hand/Which must be acted, ere they be scanned.”

Macbeth recognises the moral failure of his actions from the start – he cannot look clearly at himself for this would be to take responsibility: “To know my deed, ’twere best not know myself.” His disavowals suggest that he is trapped in a form of self-created trance. In one of her lectures on the play, Emma cited a mock modern court case that put the Macbeths on trial for murder in which they pleaded ‘diminished responsibility’ in their defense. Was Macbeth in the grip of a temporary madness? Or perhaps even of the controlling power of the witches?

After the relentless frenzy of Macbeth’s actions, Shakespeare suggests at the end of the play that the natural pace of time will be restored, when Malcolm proclaims that he will act judiciously “in measure, time and place.” 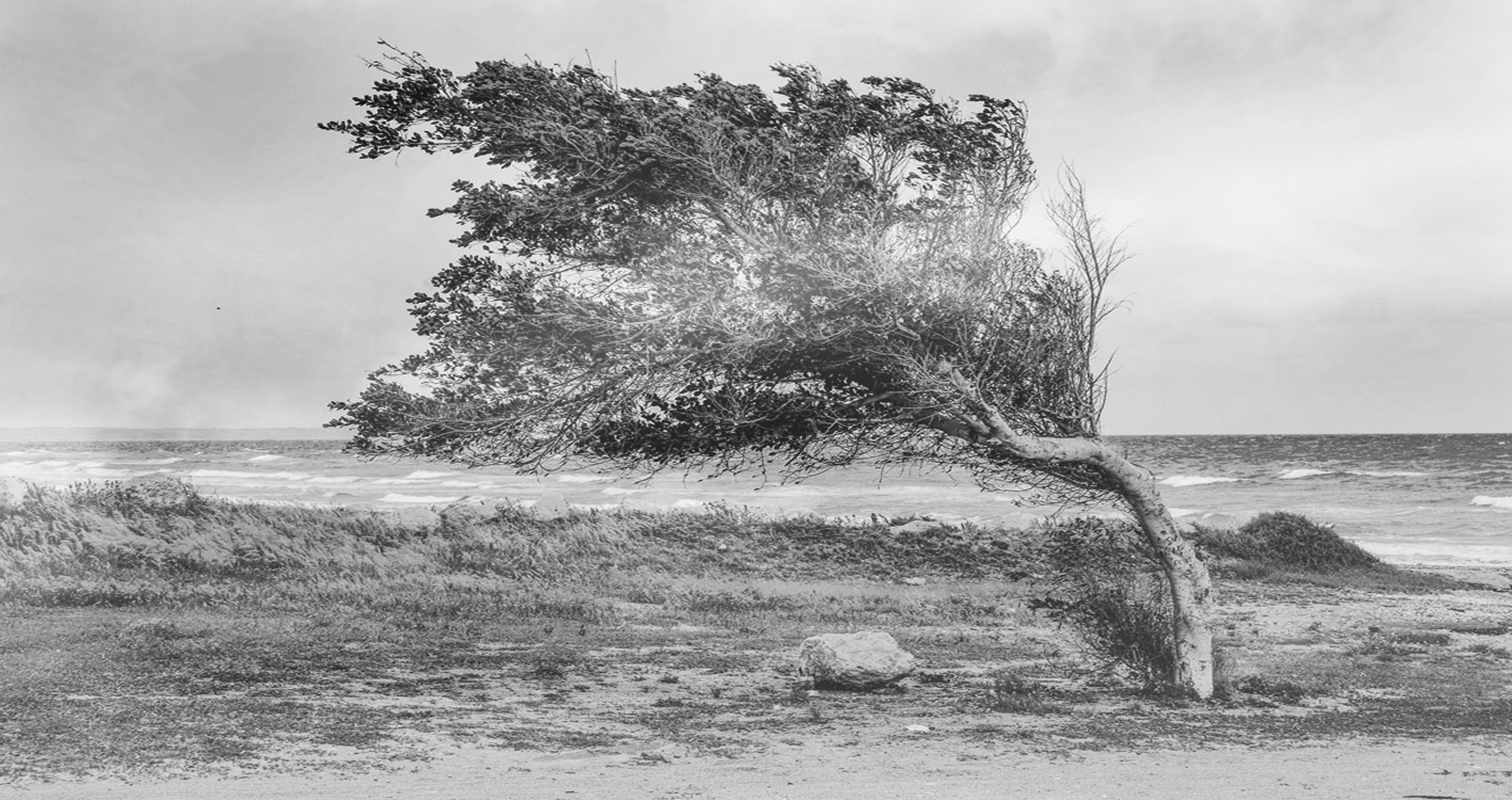 The winds of time 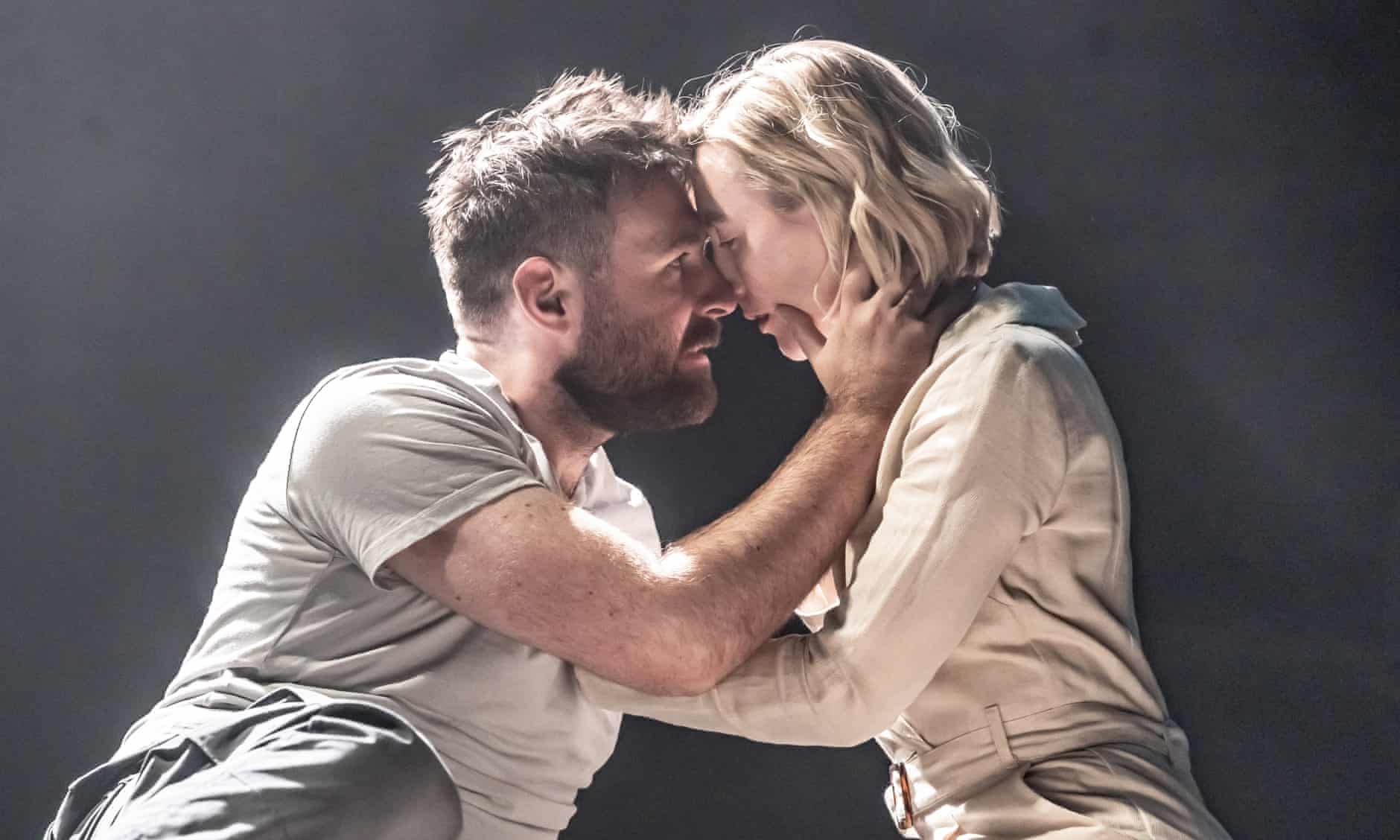 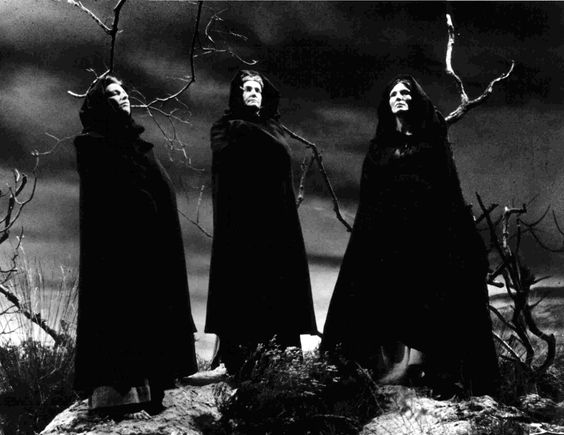 The three weird sisters in Orson Welles’ film of Macbeth, 1948 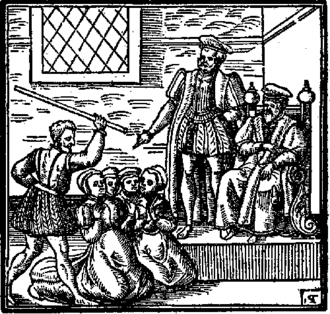 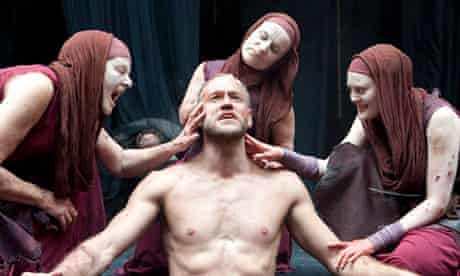 The witches at The Globe theatre, 2010
Photo: Tristram Kenton 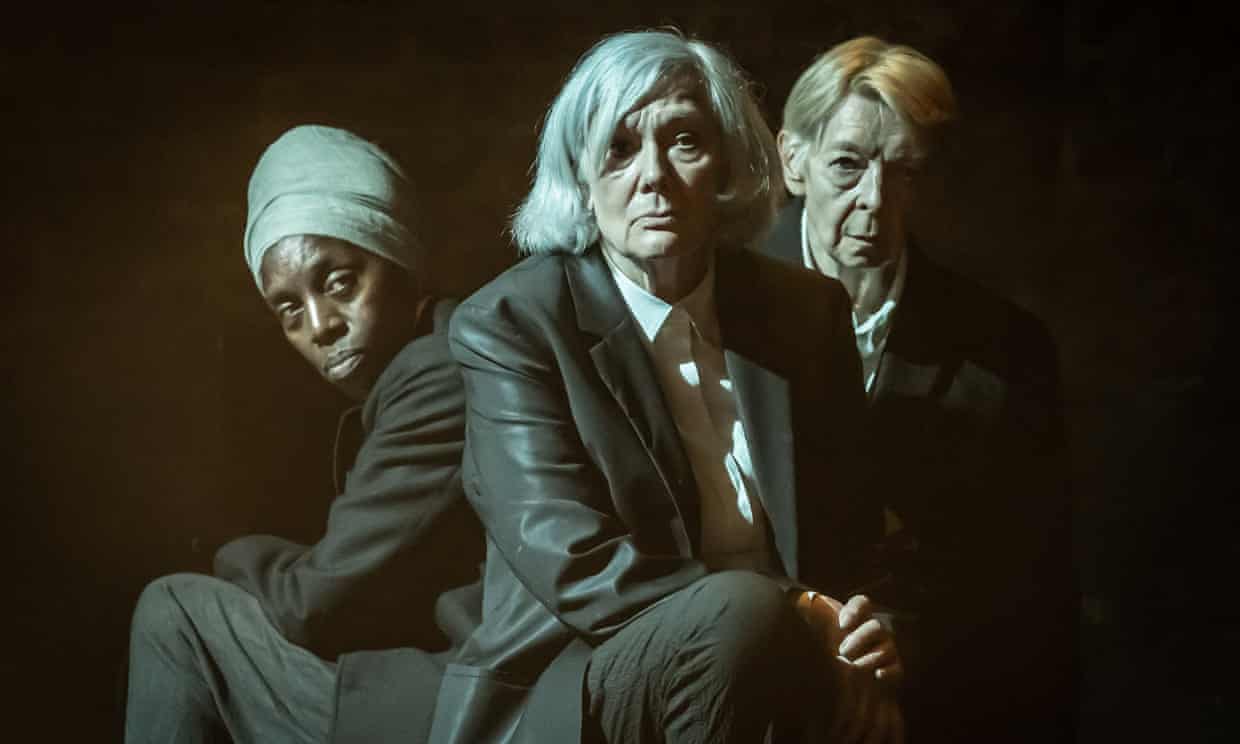 The three sisters at the Almeida theatre, 2021
Photo: Marc Brenner

The weird sisters
In the cast list for Macbeth as it appears in the First Folio edition published in 1623 the witches are identified as ‘First Witch’, ‘Second Witch’ and ‘Third Witch’, and also collectively as “three weird sisters”. In the main source that Shakespeare used for the story of Macbeth, Holinshed’s Chronicles from 1577, Holinshed describes the “weird sisters” as “goddesses of destiny…endowed with knowledge of prophesy”. At that time the word ‘weird’ meant something different to our connotation of strange or bizarre; rather it denotes fate or destiny, a force that is inescapable.

Shakespeare’s sisters are certainly endowed with a gift for prophesy, which suggests that Macbeth’s future is predetermined. Their power does not necessarily equate to their directly controlling Macbeth’s behaviour, unlike the role of the three Fates in Ancient Greece and other mythologies, who controlled humans to ensure that balance and order in the world was maintained. The Fates generally do not act with any malicious or evil intent, but to maintain stability. So why do Shakespeare’s witches seem to mislead Macbeth into his fate? By urging him to be “bloody, bold and resolute” because “none of woman born shall harm Macbeth”, for example, the Sisters help lure him into the very acts and arrogance that will destroy him.

Shakespeare’s figures owe more perhaps to the popular image of witches in his time, and in particular to the belief championed by none other than the King himself that witches were instruments of the Devil who must be hunted out and punished. James VI’s three-volume work Daemonologie, first published in 1597 and reissued when he became King of England in 1603, sought to educate Christians on the existence and practices of witches, and also contained an extract from the famous North Berwick Witch Trials of 1590 over which James presided. The account of the trial enumerated the motives and methods used by the accused witches, including one woman who confessed to having attempted to assassinate the King by casting a spell to sink his ship. The North Berwick witches were tortured and executed.

Shakespeare’s witches employ the kind of ritual practices described in the account of the North Berwick trials, including direct quotes from the witches’ testimonies. Banquo recognises the potential malevolence of the witches when he warns Macbeth that they may be “instruments of darkness” that could mislead them. As Emma suggested in our conversation, however, it is possible that the metropolitan audience at the Globe theatre in London in 1606 would have viewed these figures with more skepticism. The Shakespearean critic A.C. Bradley went as far as to say that the sisters are simply “old women, poor and ragged, skinny and hideous, full of vulgar spite”. He does grant that they may be the recipients of some limited supernatural powers, in particular the gift of prescience. As we’ve suggested prescience can easily be equated with pre-determination, and the witches seem to be part of a larger world view in Shakespeare and this play that believes that our actions are mapped out by greater powers, whether for good or evil. Lady Macbeth seems to suggest that these kind of forces are at work propelling Macbeth’s advancement:  “fate and metaphysical aid doth seem/To have thee crowned withal”.

By Bradley’s reckoning, however, even with the power of prophesy the witches are “an influence, nothing more”. Their words provoke feelings and thoughts in Macbeth that are already there. This leads modern interpreters to portray the witches more as hallucinations or psychological projections, elaborating on Banquo’s doubt that the figures they have seen may not have been real: “Were such things here as we do speak about?/Or have we eaten on the insane root,/That takes the reason prisoner?”

The witches represent the latent lust for power within Macbeth. Rather than an external power, evil is internal in human beings – what Bradley labels “the evil slumbering in the hero’s soul” – which doesn’t require much provocation to unleash it. This interpretation clearly fits more easily into our modern understanding of man’s independent agency, compared with ideas of demons and devils. Nonetheless our enjoyment of the witches comes from an apprehension that that all of these possibilities for their role in the play are imaginable together. We will forever be exercised by questions of what powers there are beyond our own, what the sources of evil are, and the indefinable scope of our own imagination and impulses. 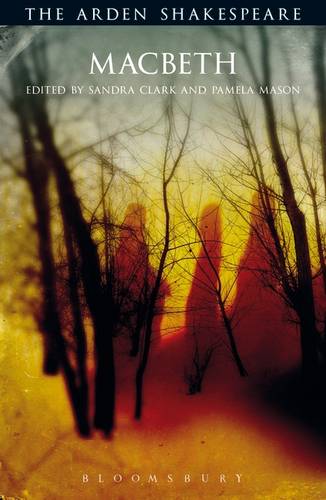 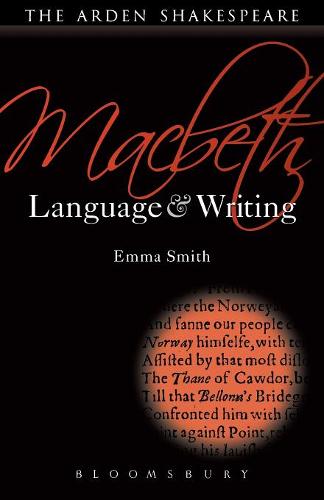